A book review I recently did for catholicmom.com. 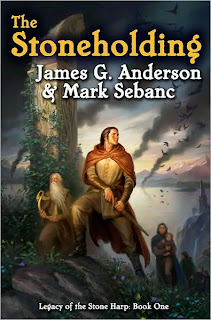 The Stoneholding is the first of two epic fantasy novels about the legendary kingdom of Arvon and the sacred objects that they treasure most. It is considered to be an outstanding book, very imaginative with a riveting story that will be reread over and over again. The sequel is supposedly worthy of unending praise as well and devoted fans all over the world eagerly await for more of the mythical series.

Somewhat daunted and perplexed to my endeavor ahead to review such an undertaking, I set my expectations high hoping to relive what some avid readers have experienced with this book. I read it and I was not disappointed. I found it totally fascinating and I was hooked from the very first page.

In the dark of the night, King Colurian of Arvon is slain; the queen and prince are abducted and never seen or heard from again. The Council of Mindal places Gawmage on the throne who is not of royal blood. He is extremely dangerous and is therefore rejected by most especially those in the highland region of Arvon, the clanholding of Lammermorn.

It is thought that the seed of Ardiel was destroyed forever when the Mindal seized power from the faltering line of King Colurian. Eighteen years go by and Gawmage’s oppressive control continues to grow throughout the entire kingdom.

Gawmage does not know what befell Prince Starigan but he is convinced that Wilum, High Bard of all Ahn Norvys is somehow privy to this secret and that he actually had a hand in spiriting the Prince away. Gawmage has one of his men extinguish the Sacred Fire to force Wilum to bring the Prince out of hiding. The Sacred Fire must be rekindled and the only ones that can retrieve the sacred spark is a descendant from Ardiel’s bloodline. Prince Starigan is the only known last descendant and no one knows where he is or if he is still alive.

The highlands are besieged with aggressors, many are killed and Wilum is afraid that the sacred objects will fall into their hands. Wilum must then send his young and inexperienced apprentice, Kalaquinn Wright and a few of the other survivors on a relentless quest to find the missing heir to the throne, Prince Starigan and find a way to relight the Sacred Fire.

The Stone Holding will take you on a ride of your life in an exciting world of castles, sword fighting, and mythical creatures. All the twists and turns that Kal and his friends encounter along their heroic adventure will keep you on the edge of your seat.

The writing style of the authors is reminiscent of Tolkien, very descriptive, but necessary to evoke the beautiful and somewhat grim world of Arvon and its characters. The focus on detail to depict the gripping story is awe inspiring and readers will be mesmerized by the authors’ expressive thought and prose throughout the book.

I highly recommend this book and I am looking forward to the second novel of this fascinating series, Darkling Fields of Arvon which is a continuation of the story of Kal and his friends. This epic will surely gain notoriety as more readers become aware of it making it a potential movie series in the near future.

Click here to read the Prologue and the first six chapters.

Disclosure: I received a complimentary copy of this book in exchange for my honest review.

Posted by Amazing_Grace at 5:02 PM