This game is free, however it is only to be used for classroom and personal use. It may not be published on any websites or other electronic media, or distributed in newsletters, bulletins, or any other form or sold for profit. Reproduction or retransmission of any materials, in whole or in part, in any manner, is not permitted.


The Nicene Creed File Folder Game: This game can be played individually or in teams.

The objective is to be the first player to get all four of his or her color pawns from his or her START location to his or her HOME space. Players must do this by answering questions about the Nicene Creed and rolling the die. 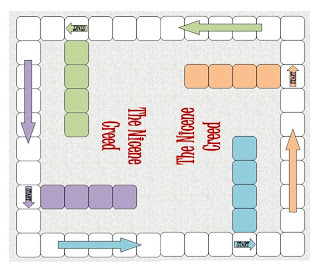 Set Up: Print game board on legal size paper (8.5” x 14”). This game can be played individually or in teams. Each player gets 4 pawns of the same color. Players put all 4 of their pawns off of the game board near their START space. Next, shuffle the deck and place it face down in a small basket near the game board. Put an empty basket nearby for the discards. Players choose who will go first and then game play goes counterclockwise. Players can roll the die and have the person with the highest number go first.

How To Play: Each player has his or her own "'START" location and "HOME" location. Players choose a color and put their corresponding pawns off of the board near their START square and take turns answering questions (the first person to their right reads the card) and rolling the die. Players must answer a question correctly to roll the die. Players must roll a 1 or a 6 to place their pawn on their corresponding START color. If a 1 is rolled, the player moves out and sits in their START space until it is his turn again. If a player rolls a 6, then she gets another turn to roll. Players move their pawns counterclockwise around the game board until they reach HOME. An exact number must be rolled on the die to enter home. If a player cannot roll the exact number and has no other moves, play passes to the next person. During game play, you can jump over another player but if you land on another player's space, you must BUMP that player and they must put their pawn off the game board near their START space. Players can not BUMP their own pawns off the game board. If the only way to complete a move would result in a player bumping himself, the pawns remains in place and the player loses his or her turn.

If someone happens to be on your START space if you roll 1 or 6, BUMP that player. If a player lands at the start of a slide (except those of its own color), they immediately move to the last square of the slide. All pawns anywhere on the slide (including pawns on the "end spots" of the slide) are BUMPED. If you land on a slide of your own color, do not slide, just stay put on that square. HOME are the "safety zones" and access is limited to only that player of the same color. Pawns inside the zone are safe from being BUMPED. The first player around the game board and brings all their pawns to HOME wins.


*Pawns can be coins, colored buttons, game pieces from other games, fish rocks for the bottom of aquariums, craft foam cut into shapes, etc. You can paint small objects such as rocks, small plastic tops or caps, etc. You can also buy pawns at game stores.

That is awesome! Thank you for sharing....can't wait to play with my family. :)

Anonymous- Thank you! I hope your family enjoys it. Please let me know how it goes. :)

Hello,
I would like to discuss your wonderful website with you.
You may be interested in helping us with our Catholic resources.
Please reply to:sharon@ctnba.org
Thank you,
S

Sharon- Please give me an email address so I can contact you. :)

Hi, I just used this tonight for my Confirmation 1 students. What a great way to introduce the Creed! The discussions this started was great! Thank you! I'm going to use the Catechism game too!

Donna Ploof- I am so glad that your students liked the game. I hope they enjoy the Catechism game too! :)