***All links and files are accessible by clicking on the blue highlighted area throughout the blog.***


Electing A Pope is based on the race game Tabula (from boardgamesoftheworld.com) which was played by the Romans and ancient Greeks. It is believed to be the ancestor of backgammon and is derived from an older Roman game called Ludus Duodecim Scriptorum, the game of twelve lines. The Emperor Claudius (45 AD) was very fond of game and had a board attached to his chariot. The Emperor Zeno (circa 450 AD) wrote a book about the game and became famous for a disastrous throw which caused him to go from a strong position to a very weak one. 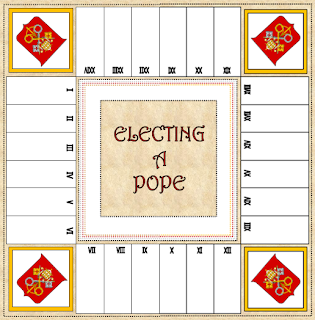 Electing A Pope: For 2 Players or 2 Teams


Set Up: This game can be played with 2 players or 2 teams. Shuffle the deck and place it face down in a small basket near the game board. Put an empty basket nearby for the discards.

Electing A Pope is played by two players on a board of 24 spaces which are in Roman numerals. Each player starts the game with 15 playing pieces (they all are a different color than the other player). All pieces enter at square 1 and travel counterclockwise. The game is played with three dice.

The starting player may be decided with the flip of a coin or by rolling the highest number with one die. The opponents make their moves by turns. To make a possible move you must answer a question (the other player draws a card and reads you the question) about electing a pope. If you are correct you may roll the dice and move one or some of your pieces (depending on what you roll). If you do not answer the question correctly, your turn is over.

The players take turns to throw three six-sided dice. The throw can be shared between pieces. For example, a throw of 2, 3, 4 could be used to move one piece by 9, two pieces by 5 and 4 (or 6 and 3 or 7 and 2), or three pieces by 2, 3 and 4. If a player lands on a space occupied by an opponent’s piece the opponent’s piece is removed from the board and must start again. If a player has two or more pieces on a space the pieces on it cannot be captured. An exact throw is needed to remove a piece from the board. A player must use the whole of his throw if possible. Any part of a throw that is unplayable is lost.

The winner is the player who is first to get all his pieces off the board.


Electing A Pope Game- Directions, Game Board, Title, Question Cards
*Playing pieces can be coins, colored buttons, game pieces from other games, fish rocks for the bottom of aquariums, craft foam cut into shapes, glass rocks for vases, etc. You can paint small objects such as rocks, small plastic tops or caps, etc. You can also buy pawns at game stores.

*You can also use a large circle hole puncher and make your own game pieces using card stock, craft foam, etc.

I love this game, my husband and I teach 5th grade religious ed. at SS. CYRIL AND METHODIUS catholic church in Lemont, IL.

One of the things the kids love to play is a game called 4 squares, the orginal game is they bounce a ball in a square. WE changed it for the kids to play religious wise. The 4 courners of the room are pre determined this courner is a, this corner is b etc. then we ask the questions that you provided the kids move to that corner of the room based on what they think their answer is....it is cute to see them try to proswade each other. the right side of the room is true the left side is false. This game gets them up and moving and then when they are wrong they sit down. It is fast and it keeps the kids moving, and some games go on, and some are over quickly. We do this for chapter tests, to prepare for the test. Some kids just follow the crowd but others know their chapter and win on the first question. Thank you for giving us questions to try with them. I just love your questions. and your blog!

I'm going to link to this great game/post in a post I wrote that compiled various educational resources for the coming Papal election. I know my kids are going to enjoy it for sure!

I love your 4 square game! Thank you for sharing! :)

KMantoan- I hope your kids enjoy the game and learn a lot! :)

Great idea!! I will post about it next week at http://familiacatolica-org.blogspot.com/

I bet you are planning on doing something for the election of the pope. You always have great ideas! :)

For your convenience, we provide links to various other websites that may be of interest to you. We are not responsible for the content of such external sites or resources, and do not endorse and are not responsible or liable for any content, advertising, products, or other materials on or available from such sites or resources. We are not responsible or liable, directly or indirectly, for any damage or loss caused or alleged to be caused by or in connection with use of or reliance on any such content, goods or services available on or through any such site or resource. The Catholic Toolbox does not control such websites and is not responsible for their content nor is it responsible for the accuracy or reliability of any information, data, opinions, advice, or statements contained within such websites. These websites can change without warning making links inactive and/or the content altered. Please read the terms and conditions or terms of use policies of any other company or website you may link to from our website.

*What Should Catechists Do To Teach The Faith Effectively? Suggestions and tips to be the best catechist.

*What is the key to success when teaching CCD? Tips for success.