Penitential Rite file folder game is based on Alquerque which originated in the Middle East as the game Quirkat. Alquerque boards are carved into the stone slabs which form the roof of the great temple at Kurna, Egypt. The Arabic author Abu al-Faraj al-Isfahani mentioned Quirkat in his 24 volume work Kitab al-Aghani ("Book of Songs") c. 950 AD. Alquergue migrated to Europe when the Moors invaded Spain. It was named Alquerque (the Spanish form of El-Quirkat) in the Alfonso X Manuscript which was written between 1251 - 1282 at the command of Alfonso X, King of Leon and Castile. This game is the ancestor of modern day checkers (Draughts in the UK) when it evolved to being played on a chess board instead of the standard Alqerque board. The Madagascan game Fanorama may have evolved from Quirkat. (From boardgamesoftheworld.com). 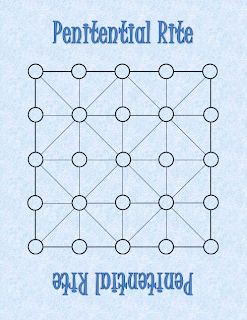 
*You can also use a large circle hole puncher and make your own game pieces using card stock, craft foam, etc.

I am SO excited to have found your website!!! What an incredible resource. Thank you and God bless.

One thing I love doing for Catholic Schools Week is to have a reverent scavenger hunt in the church. One of the things I love about my faith is how we celebrate it using all of our senses. We take for granted how rich and full it is. What are some things found in the church that are unique to our identity?

There are gobs of them to find starting from the holy water, to the saints on the window, incense, the stations of the cross... You could probably even make an exhaustive A to Z list! My students find upwards of 20 things that are available to help guide us in the right direction. Who says Mass is boring? You're just not paying attention!!!